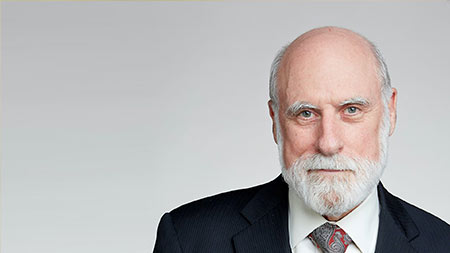 We are pleased to announce that Vinton Cerf will be speaking at the The Future of Global Safety, Lloyd’s Register Foundation's Digital Summit 2020.

With Robert Kahn, Vint is the co-designer of the architecture of the Internet. In 1997 they received the U.S. National Medal of Technology and in 2005, the Presidential Medal of Freedom and the ACM Turing Award. In April 2008 they shared the Japan Prize for their work and in 2013, the Queen Elizabeth Prize for Engineering. He is a member of the US National Academies of Science and Engineering and the Legion d’Honneur.

Vint Cerf served as chairman of the board of the Internet Corporation for Assigned Names and Numbers (ICANN) from 2000-2007 and he has been a Visiting Scientist at the Jet Propulsion Laboratory since 1998.

He holds a Ph.D. in Computer Science from UCLA and twenty-nine honorary degrees.