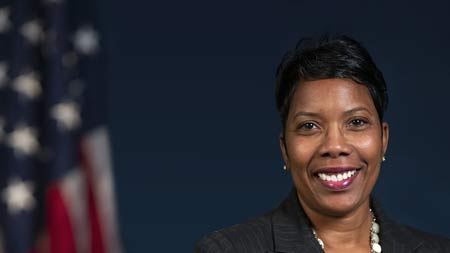 We are pleased to announce that Dolline Hatchett will be speaking at the  2019 Lloyd's Register Foundation International Conference.

Dolline Hatchett is a senior executive serving as the Director, Office of Safety Recommendations and Communications for the National Transportation Safety Board. She is responsible for shaping and promoting how the agency responds and coordinates with Congress, the press, and the public to ensure consistency and accuracy of the strategic positions and issues of the NTSB.

Hatchett was appointed in May 2014 to the position of Vice President of Communications at the Export-Import (EXIM) Bank of the United States, where she managed its digital practice, media relations, marketing, events, and strategic communications. As an officer of the bank, she provided counsel to senior leadership to ensure the successful execution of high-priority communications initiatives on the local, regional, national and international levels.

Before joining the EXIM Bank, she served as the director of media relations for AREVA Inc., the world’s largest nuclear energy provider where she directly managed the North American media operations in support of its president and chief executive officer. As the spokesperson and communications architect across AREVA’s 44 facilities nationwide, she managed all press relations and crisis communications efforts in coordination with its Paris headquarters.

Hatchett previously was the director of communications and public affairs at the U.S. Department of Energy where she managed a corporate communications team for the Office of Science, a $5 billion organization and the largest sponsor of basic physical science research in the U.S. She provided strategic leadership, management, policy development and technical oversight for media relations and event planning across seven interdisciplinary areas of the organization.

Hatchett graduated with honors from Norfolk State University with a degree in Mass Communications. She attended Harvard University’s John F. Kennedy School of Government, is a graduate of the Defense Information School (DINFOS), the Federal Executive Institute and the American University’s DHS Capstone Program for senior executives.