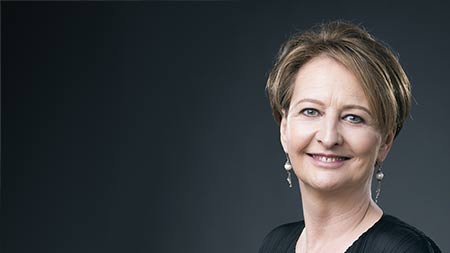 We are pleased to announce that Edwina Dunn will be speaking at the  2019 Lloyd's Register Foundation International Conference.

Edwina Dunn is co-founder of dunnhumby, the pioneering company behind Tesco’s Clubcard, My Kroger Plus and other loyalty programmes around the world. She sold the business to Tesco in 2011, by which time it had grown to an organisation of 1500 people, reaching 350 million customers in 25 countries. Having retired, she returned to a new innovation challenge. She is now CEO of Starcount, a consumer insights company that combines the science of purchase and intent and brings the voice of the customer into the boardroom.

Edwina is founder of The Female Lead: a non-profit organisation dedicated to offering alternative role models to those ever-present in popular culture and giving women a platform to share their inspirational stories. The Female Lead: Women Who Shape Our World was published by Penguin Random House in February 2017 and along with films and powerful teaching materials, is being donated to 18,000 schools across the UK and USA to inspire the next generation of female leaders.

Between 2014 and 2017, Edwina Chaired a Government backed, private-sector sponsored, three-year campaign “Your Life “ to ensure the UK has the Maths and Physics skills it needs to succeed in today’s competitive global economy. Future Finder is the legacy technology created and represents the biggest free Careers Advice app in the market today.

Edwina is a Trustee of The Science Museum and was awarded a Doctorate of Business Administration from the University of Derby and Honorary Doctorates from Middlesex University and Kingston University. She is also a Fellow of Lucy Cavendish College, Cambridge. She was a Non Executive Director of HMRC, focused on Data & Digital Transformation for 3 years under the leadership of Lin Homer. In September 2018 Edwina was the recipient of the Fashion 4 Development Women’s Champion Award in New York.