71% of people who use the internet recognised at least one of the three main internet-related risks — the biggest concern was fake news, ahead of fraud and cyberbullying.

New data from the Lloyd’s Register Foundation World Risk Poll shows that internet users across the world regard receiving false information as a greater worry than other risks such as online bullying and internet fraud. Seventy-one percent of people who use the internet recognised at least one of the three main internet-related risks — the biggest concern was fake news, ahead of fraud and cyberbullying.

The World Risk Poll, conducted by Gallup as part of its World Poll, is the first global study of worry and risk across the world.  It is based on over 150,000 interviews in 142 countries including places where little or no official data exists yet where reported risks are often high.

The poll reveals that 57 per cent of internet users across all parts of the world, across all socio-economic groups and all ages, regard false information, or ‘fake news’, as a major concern. Concern is more prevalent in regions of high economic inequality and where ethnic, religious or political polarisation exists, leading to weakening of social cohesion and trust. The countries most concerned by fake news were Malawi, where the worry was cited by 87 per cent of people who use the internet, Rwanda by 87 per cent, Bolivia by 84 per cent, Uganda by 83 per cent and Senegal by 83 per cent.

However, the World Risk Poll also reveals that a significant minority of the world is not aware of the risk of fake news. Says Professor Richard Clegg, Chief Executive of Lloyd’s Register Foundation,” The number of people not worried about fake news is a threat to safety. If you aren’t aware that information can be wrong, you are at risk. It is vital, as more and more people access the internet, that they are equipped with the skills to enable them to question the validity of the information they see on line.”

Online fraud, although one of the world’s most costly illegal activities financially, is seen as the second biggest threat to internet users after disinformation. Online fraud costs the world $600 billion per year, 0.8 per cent of global GDP (Center for Strategic and International Studies) mostly via scams eliciting personal information such account passwords or credit card information.

Regionally, Western Europeans were particularly likely to worry about fraud including at least two thirds of internet users in Portugal (78 per cent), France (74 per cent), Spain (71 per cent), the UK (69 per cent) and Italy (67 per cent). 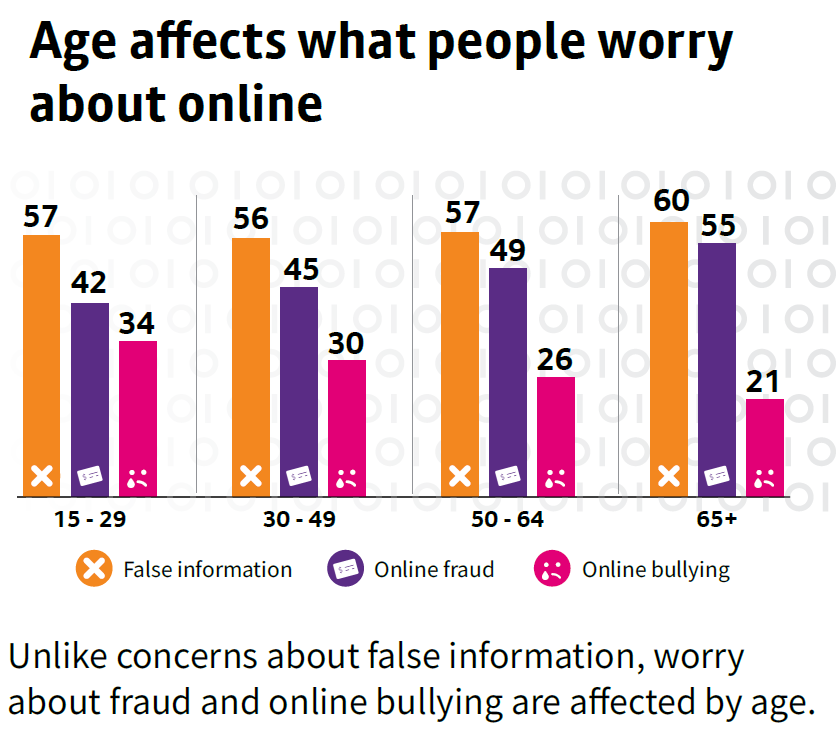 Cyber risk is one area of life where people are highly sensitised to potential harm.  Sustained risk education campaigns and high-profile media stories about topics such as data theft, online fraud, bullying and the widespread presence of disinformation and fake claims. People are alert to the risks - the challenge is to empower them to protect themselves as cyber threats rapidly evolve.

Says Professor Clegg, “As internet access continues to spread in low income regions, governments should be aware of younger users’ vulnerability to internet bullying and fraud and work with these communities to design intervention and prevention strategies to address these risks.”

Philip Howard from the Oxford Internet Institute says, "Understanding people’s fears, means we can work with technology companies and regulators to ensure they understand the importance of protecting human rights through the technology they develop, in order to make people feel safe as well as be safe.  It also allows us to equip people with the knowledge to know where the risks as well as the benefits of technology exist.”