Fishermen in poor countries face unacceptably high risks of death or life-changing injuries. In Bangladesh, every year over 1,350 fishermen die at sea, in boats without the most basic safety equipment – or even clean drinking water.

Fishermen in poor countries face unacceptably high risks of death or life-changing injuries. In Bangladesh, every year over 1,350 fishermen die at sea, in boats without the most basic safety equipment – or even clean drinking water. And when they do, whole families lose not only a husband and father but their only way of making a living.

Lloyd’s Register Foundation’s fishSAFE 2025 project is helping save fishermen’s lives in Bangladesh. A partnership with the FISH Safety Foundation (FSF) – an international charity based in New Zealand – and the Patuakhali Science and Technology University in Southern Bangladesh, the project provides safety awareness and training for fishing communities in Bangladesh. It aims to achieve a reduction of 20% in vessels lost, and 25% fewer serious injuries, ill-health and lives lost in by 2025.

Work began in 2018 when Lloyd’s Register Foundation hosted a meeting of experts in London. This looked at ways of cutting death and injury rates in the fishing industry in developing countries. A research project followed in the Philippines, conducted by the FSF and the Marine Institute of Memorial University, St John's, Canada. It found that safety training and awareness-raising were vital interventions to make fishing safer. This led to fishSAFE2025 starting work in Bangladesh.

Eric Holliday, FSF Chief Executive, said: "This grant has been invaluable in helping us make fishing safer in poor communities. The death rate among fishermen in Bangladesh is more than twice as high as the global average, compared to International Labour Organisation (ILO) figures. The toll this takes on communities is unacceptable. Training, and simple interventions such as access to safe drinking water and life-jackets, can make a big difference. The Lloyd’s Register Foundation funding makes this possible." 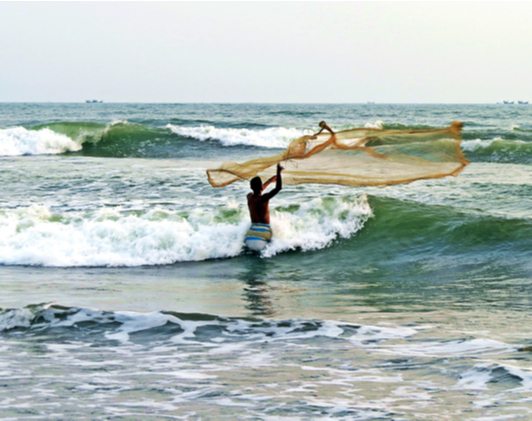 They visited the coastal villages of Mahipur and Allipur, where they distributed safety eyewear and wound care packs as part of the re-FISH initiative (www.re-fish.org). re-FISH sources reusable safety, vessel and fishing equipment to be donated to communities in Bangladesh. The team spoke to people directly affected by the hazards of fishing, including the wives of fishermen lost at sea.

The risks caused by the lack of safety equipment are compounded by frequent severe weather – and the team met several women whose husbands had died or suffered life-changing injuries.

"Several women’s husbands were lost, injured and no longer able to work, due to Cyclone Bulbul in November 2019," said Kate. "Another young woman's husband was lost at sea during the same cyclone while she was pregnant. The baby had now been born without a father. The women talked about the struggle they faced due to a lack of financial support to replace their husbands' income."

The team also talked to fishermen about their health and accidents at sea. Common themes were injuries to fingers, back pain and stomach ailments. They were then taken on board a docked fishing trawler, which had no visible safety gear apart from a few worn lifejackets, and no clean drinking water. The team has planned activities including posters, social media messages and training materials. These will be delivered by local fishermen, trained by the project, to 400 fishermen, trawler owners and vessel skippers.

The project is expected to save lives - and help influence the Bangladesh government and trawler owners to make the industry safer.