Since 2015, Lloyd’s Register Foundation has  been funding a project that’s inspiring and educating the scientists of the future in Turkey. Our partners, the Educational Volunteers Foundation of Turkey (TEGV), are working to drive up Turkey’s poor record in science education – ranked 44th out of 65 countries surveyed in 2012.

TEGV are bringing scientific education and extracurricular activities to children (and their teachers) in remote, deprived areas of the country. They’re using a mobile learning unit – the Science Firefly – to deliver science education to children aged six to 14.

The Science Firefly is part of TEGV’s investment in building up STEM education in Turkey, so that future generations are more equipped to become scientists and engineers. As funding partner, the Foundation is contributing to the resilience and development of Turkey’s scientific sector.

Our Managing Director, Professor Richard Clegg, says: “The Science Firefly project fits in well with the Foundation’s strategic theme of promoting advancement of skills and education by inspiring the next generation in science subjects. The project demonstrates sustainability with a positive impact beyond the project period. The training given to teachers and volunteers will enable them to continue using the education programme, approach, and materials after the mobile unit has left. The project will also leave materials behind for every school as well.” 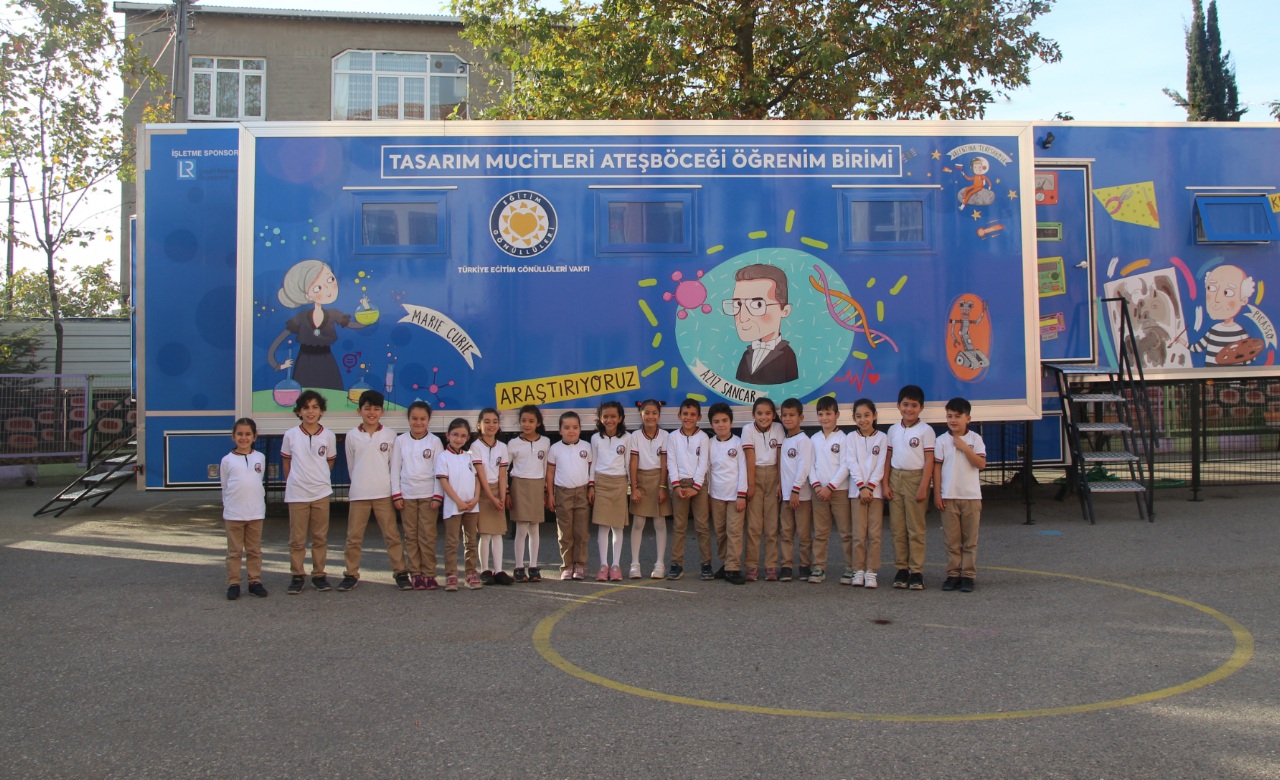 The Science Firefly helps raise children as scientific-minded, problem-solving individuals with a positive attitude towards science. It brings resources to train teachers and volunteers in innovative methods, supplementing basic science education with a more engaging and inspiring curriculum. The schools receive books for their libraries, as recommended by programme advisors, for both teachers and students.

TEGV was founded by a group of industrialists, managers and academics in 1995, with the aim of supporting the basic education provided by the government. It now has a twenty-year track record of success, having served almost two million children across Turkey, with the support of over 60,000 volunteers. Its objective is to create and implement educational programmes and extracurricular activities for children aged 6-14, so that they can acquire skills, knowledge and attitudes supporting their development as rational, self-confident and inquisitive individuals.

Ayse Inan, TEGV’s International Projects Manager, says: “Science education is failing in Turkey, as shown by the country’s performance in the OECD’s PISA exams. In the 2012 PISA, Turkish students were ranked 44th out of 65 countries in science, making Turkey lower ranked than almost all EU countries, North America, and East Asia. This project aims to inspire a love of science in children, train teachers in innovative, child-centred teaching techniques in the field of science, and encourage community involvement through the engagement of volunteers.”

The Science Firefly met children from the island of Büyükada in February, 2016. They included İbrahim, 10 years old, said: “I've done experiments I never did before in this Science Firefly. I used virtual reality goggles. I created holograms."

Ayşe, 11 years old, said: “I really like the Science Firefly, and learned lots of new things here. Science is everywhere. I loved the experiments. Sisters teach the experiments and I really love them as well. I am very happy."

In spite of a state of emergency and a shift in government attitudes, the Science Firefly has reached 2,329 children and delivered training to 39 teachers and 54 volunteers. Recordings of lectures from scientists were integrated into the content of the programme as a response to the inability to provide live lectures in the second part of the project.

The Science Firefly has worked with local government and schools to run science festivals in villages, such as Arhavi and Aksaray. A total of 335 children took part and local volunteers were recruited, coming away from the experience with more positive attitudes towards science, as well as knowledge and skills. 100% of teachers said that they would continue using the techniques they had learned in their classes.

After the two-year launch period, TEGV continued running the Science Firefly programme, reaching disadvantaged schools and inspiring as many children as possible.