It’s time again for our next monthly newsletter from the Lloyd’s Register Foundation. This time we’ve got an interesting mix of news that shows the breadth of work that the Foundation supports, from scientific research to safety-related training and public education. We aim to keep these newsletters short, providing a taster of the what the Foundation is engaged in, so please follow the embedded links if you’d like to learn more. As always, we’re happy to answer any questions or supply follow-up information as desired. There’s also a lot in the pipeline which we look forward to sharing with you soon.

As a young charity it’s important that the Foundation learns from the experiences of more established bodies. In this spirit, we’ve been building a good relationship with the Wellcome Trust at the working level, which has culminated in an informal meeting between both Boards, including the chairmen and some trustees from both sides. A wide ranging discussion took place covering operational housekeeping matters as well as areas where we might have complimentary research interests, such as in big data and public engagement. The Wellcome Trust is a global charitable foundation dedicated to improving health by supporting bright minds in science, the humanities and social sciences.

Advancing our interests in nanotechnology 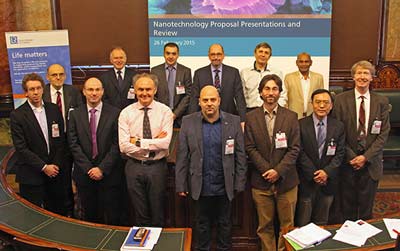 Last month the Foundation hosted a gathering of eminent scientists explaining their work on nanotechnology. Among the presenters was Professor Sir Andre Geim, the scientist who won the Nobel Prize for his work on graphene. The Foundation published a foresight review last year and put out a call for proposals addressing the challenges identified in the review. The seminar was the final stage in the selection process for application for grants in this field, Foundation will announce the winning awards in April.

Highland Celebration of Engineering and Science 2015 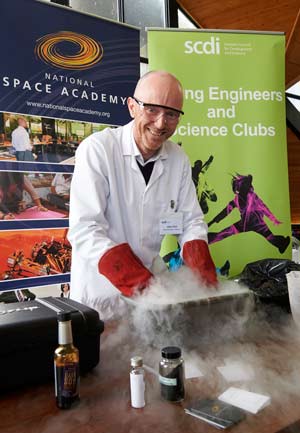 Our funding for SCDI’s Young Engineers and Science Clubs Scotland includes regional celebrations where schools come together and receive awards. The Highland Celebration of Engineering and Science event was on Friday 13 March. Despite some Island schools not making it because of adverse weather, 17 schools took part. Winners at primary and secondary level spanned the region, picking up trophies and cash prizes for the schools to boost their STEM clubs. We are particularly pleased to see cross-fertilisation of our funding as one of the Lead Educators from the National Space Academy, Allan Reid, a teacher from Elgin Academy, delighted the young audiences with a demonstration of the formation of a comet. Our funding supported the expansion of the Lead Educator scheme into Scotland. Well done to all the winners.

Teaming up with Tomorrows Engineers at the Big Bang

The Foundation funded Tomorrow’s Engineers have developed a stage show to be performed at The Big Bang, the largest celebration of science, technology, engineering and maths for young people in the United Kingdom. The stage show, Risky Business, aims to show to young people that risk is a can do thing. This fits with the Foundation’s strategic theme of promoting safety and public understanding of risk.

Over 75,000 people are expected to attend the four day event with a team of LR graduates also in attendance. If you would like to find out more about The Big Bang fair, please follow the link: www.thebigbangfair.co.uk

Collaboration with RNLI to save lives

We are funding the sea survival and fire-fighting training for new RNLI crew in the British Isles over a five-year period. Volunteer crew members come from a wide range of backgrounds and 90% of new recruits have no professional maritime experience. In the controlled environment of the RNLI College in Poole, UK, they gain knowledge and skills to crew a lifeboat, giving them confidence to respond to real-life rescues.

A trainee from Tynemouth Lifeboat Station describes why this training is so important: "It is not possible to deploy life-rafts during station exercises, so it is vital that we practise at Poole. Likewise for boat capsize, flares and fire safety. It is absolutely essential."

When asked if he thought the course had helped develop his crew skills, Conal, a university student from the Aran Islands, Republic of Ireland, responded: “Definitely, I found it helped me cut out very bad habits, which I didn’t even realise could have ended in fatal injury had I not done this course”.

Our funding trains 288 crew members each year; an additional 101 were trained in 2014 and there is a backlog of others waiting. Next year the RNLI hopes to train over 450. In 2014 crew members trained were from 151 lifeboat stations, which all together launched 5,584 times, saving 226 lives and rescuing 5,735 people. Overall in 2014, the RNLI’s volunteer crews rescued over 8,300 people and saved over 320 lives

As we settle into 2015, the Information Centre continues to develop the pilot year for its digitisation project. Over the past month the team has organised meetings with the archive companies Axiell & Preservica as well as with established collections like the Wellcome Trust. We have begun to identify the best approaches in digitising and cataloguing our extensive archive of over 65,500 ships, with guidance from Wellcome Trust experts Dave Thompson and Rioghnach Ahern.

There is a feeling of enthusiasm from within the archives community and the general public which is evident from the interest in our digitisation blog. The blog has attracted visitors from over 37 countries, including Peru, Russia and New Zealand with its international audience growing by the day.