Welcome once again to all subscribers of our newsletter. There are many more activities going on in the Foundation than we can write about here, but we hope it gives you a flavour. More information and latest news can always be accessed from our website and social media.

As a charity, what drives us is impact and excellence. We want to work with the best minds in the world engaged on high quality, user-inspired work that has maximum impact. Over the past few months we’ve been particularly dwelling on how we can measure the impact from our grant giving. Perhaps the best evidence can be obtained from case studies of practical examples where work we have supported has resulted in a benefit to society in line with our charitable aims. Our intention is to collect and share these case studies, which we look forward to including in future newsletters.

At the end of March the Foundation’s Board of Trustees met in Korea, which was followed the following week by Richard Clegg visiting Singapore. Whilst in Korea the Board visited the universities at SNU and Pusan and saw at first-hand the Foundation-funded work and research teams there in the fields of marine engineering and architecture. Amongst the topics discussed were how to network these important research centres and capabilities in Korea to the new areas that the Foundation is establishing in areas such as structural integrity, nanotechnology and big data.

In Singapore visits were made to the Singapore Maritime Foundation where LRF funds a number of scholarships, followed by visits to the National University of Singapore (NUS) and Nanyang University. In addition to catching up with the Foundation-funded research centres at NUS in the marine field, discussions also took place on nanotechnology and the public understanding of risk, which may be a growing area of interest in Singapore. 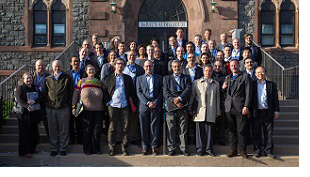 On 15-17 April 2015, the Stevens Institute in Hoboken New Jersey hosted the Lloyd’s Register Foundation Resilience Engineering workshop. Participants from more than a dozen countries and 5 continents came together to share their perspectives on the emerging field of Resilience Engineering, and to explore how the Foundation might make a distinctive contribution to the field. Experts came from a wide range of infrastructure sectors including healthcare, transport, food and water and IT and communications, and brought perspectives from industry, from government, from city and regional-scale planning and from academia. The Foundation intends to publish a review of Resilience Engineering in the late summer with Michael Bruno from the Stevens Institute as lead author. There will be a consultation on the draft report which will include a web-based consultation and a session at the Resilience Engineering Association symposium in Lisbon in June.

To learn more about NSIRC, how to participate, the latest news and to see case studies on progress go to www.nsirc.co.uk

One of the holders of an Arkwright Engineering Scholarship supported by the Lloyd's Register Educational Trust 2007-09, has helped select new Arkwright Scholars for 2015.

Naval architect and design engineer, Dan Alldis was on one of the interview panels identifying future engineers just entering sixth form. Dan says: “I was really excited to be interviewing the next generation of Arkwright Scholarship candidates at the University of Southampton in April. It's been nine years since I had my own interview - I’m feeling old! I gained much from my scholarship sponsor, the Lloyd’s Register Educational Trust and I am very pleased to be putting something back into the scheme!”. Dan, who studied at Southampton Solent University, works on the AutoNaut USV project at MOST (AV) Ltd in Chichester, UK, demonstrating the value of Arkwright in nurturing and encouraging young engineers to fulfil their own potential, and in turn pass on their experience.

Arkwright’s 13 interview events are hosted at top universities throughout the UK. In 2015, Arkwright is interviewing 715 candidates and expects to award some 400 Scholarships. The Foundation is supporting six Scholars this year and has contributed to widening access and development of the scheme. All of Arkwright’s interviewers are volunteers, and Engineers from all backgrounds are invited to consider helping to interview new candidates during the 2016 Scholarship application round.

The team recently visited the British Library, to meet with Patrick Fleming (Head of Business Change at the British Library) and members of museum’s digitisation initiative. In recent years, the British Library has digitised over 7 million newspaper pages as well as several thousand historic maps. In spite of their busy schedule, the British Library were kind enough to dedicate a whole afternoon to discussing their own digitisation activities whilst also giving us a tour of their state of the art scanning studios. The meeting proved to be extremely useful in helping us to determine the conservation, digitisation, cataloguing and uploading of an historical archive.

Over the past month the digitisation team has also embarked on its third trip to LR’s external archive at the Brass Foundry. The team sampled thousands of items from our archive which illustrated the diversity of our collection, not only in terms of content – from boiler plans to mid-ship sections – but also in regards to the sizes of items, a factor which would dictate different measures in the scanning process. In addition, our sampling of the collection took an interesting turn when we discovered a number of rare items – such as a correspondence letter between LR and Great Western Railway from 1898.

In other news, our digitisation survey has surpassed 250 replies and continues to help us formulate plans for a digitised archive that is based upon its user’s needs.