60% of people worried about food safety

Most of the world is worried they will be harmed by the food they eat every day according to the Lloyd’s Register Foundation World Risk Poll.  The World Risk Poll is the first global study of worry and risk across the world. The poll was conducted by Gallup as part of its World Poll, with over 150,000 interviews completed in 142 countries.

Over half of the world’s population, 60 percent of people worldwide, say they are worried about the food they eat and 51 per cent are concerned about the safety of water they drink.  Seventeen per cent of poll respondents – equivalent to one billion people worldwide – suffered significant harm from the food they ate in the two years prior to polling, and almost as many, 14 per cent or 823 million, have been seriously harmed by the water they drink. 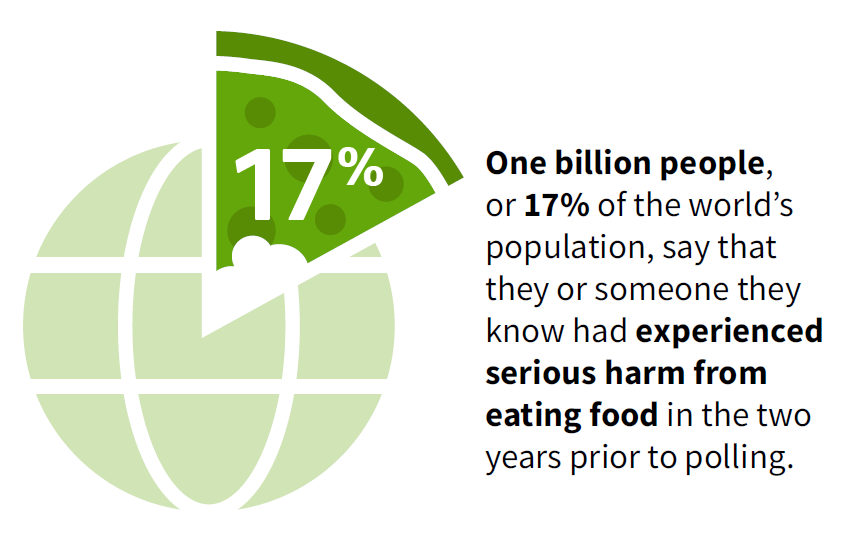 “The World Risk Poll gives us the first ever global view of people’s attitudes and awareness of the risks posed by unfit food and drink.  By understanding how people view food safety risks, what they worry about and what they never consider, we can create interventions that are relatable and practical so people can act in their interests and keep safe and healthy.” Says Markus Lipp from the United Nations’ Food and Agriculture Organisation.

The poll indicates that the burden of food-related diseases is not spread equally across the world and is highly related to economic development levels, with low-income and middle-income countries disproportionately affected. The greatest levels of harm from food occur in East Africa (29 per cent experienced harm) and the Middle East (27 per cent experienced harm). Countries and territories that had experienced the most harm from food were those in the developing world; the top three countries were Liberia (52%), Zambia (51%) and Mozambique (45%).

Dr Sarah Cumbers, Director of Evidence and Insight, Lloyd’s Register Foundation, said, “Despite the global nature of the safety threat from contaminated food and water, policymakers and professionals have been hampered by the lack of rigorous and comprehensive data on the level and nature of hazards and the prevalence of associated illnesses. The World Risk Poll supports efforts to collect data on the safety threat of contaminated food and water.

“The results of the World Risk Poll also reveal that food safety authorities need to consider carefully the channels they use to disseminate crucial information if it is to be effective. They should seek out ways to build trust amongst the people most threatened by unsafe food and water, tailoring their messages and the communication routes to vulnerable people according to the different audiences they are addressing.”

In Southern Africa and Latin America, and the Caribbean, levels of harm experienced from food are high (26 per cent and 22 per cent respectively) but levels of worry are much higher (43 per cent and 33 per cent). The same pattern is repeated for experience of harm and worry about water. This suggests that communication about food and water risks should be very specific to empower people to take action that keeps them safe.

Many of the countries with the highest levels of worry about food and water are low income economies and those experiencing severe weather events. The highest awareness of food and water related risk was in Malawi closely followed by a number of countries in sub-Saharan Africa.

Data from the Food and Agriculture Organisation of the United Nations shows that each year around three million people across the world die as a result of eating food tainted with bacteria, viruses, pesticides or chemical residues. In addition 600 million people a year fall ill through eating contaminated food, adding to the toll of human misery on the planet but also costing the global economy hundreds of billions of dollars. The World Health Organisation estimates that a further 485,000 people die each year from drinking contaminated water.

Although the world’s population suffers many problems from the food they currently eat, genetically modified (GM) food is seen as a high risk with 48 per cent of people worldwide saying they think that GM foods will mostly harm people in their country over the next twenty years. This is a view predominantly held in higher-income countries where GM foods are seen as a safety issue. In lower income countries 42 per cent of people think that GM foods will mostly help people in the next twenty years.

The World Risk Poll also shows that only 15 per cent of the world’s population trusts government organisations in their countries as their number one source of information on the safety of food and water, preferring to trust information provided by family and friends ( 31 per cent) and medical professionals (22 per cent). This pattern is the same for people who have experienced harm and those who have not experienced it.