HELMEPA’s exhibition, Marine Environment - Shipping - Sciences, was officially inaugurated on the island of Chios on 22 February 2016. The exhibition is part of an educational community and public awareness campaign which is funded by Lloyd’s Register Foundation. 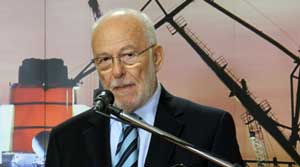 The launch was held in co-operation with the Maria Tsakos Foundation (International Center for Maritime Research and Tradition) and under the auspices of the Regional Authority of Chios–Northern Aegean. Welcoming the guests, the Director of the Maria Tsakos Foundation, Pavlos Kalogerakis, expressed his sincere pleasure for the implementation by HELMEPA of these awareness raising activities in Chios with a special emphasis on schoolchildren. 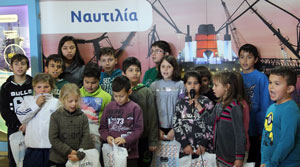 Members of HELMEPA Junior from the Primary School of Volissos

In presenting the initiative, HELMEPA’s Director General, Dimitris Mitsatsos referred to the Association’s close and long-standing ties with the island of Chios, homeland of the late George P Livanos who conceived the idea of the founding of HELMEPA, and a large number of member-seafarers and shipowners.

The exhibition will be visited by approximately 1,200 pupils from 11 primary schools and and high schools of the islands of Chios and Oinousses, with transport costs being covered by the campaign, and it will be open to the public for two hours every day.

As part of the campaign, on 2 March, there will be a train-the-trainer seminar for teachers, The marine environment and us: ensuring a sustainable future, in co-operation with the Maria Tsakos Foundation and the Directorates for Primary and Secondary Education of Chios.