How willing are you to "Take A Risk"?

Ten minutes with comedian Timandra Harkness on her new show. 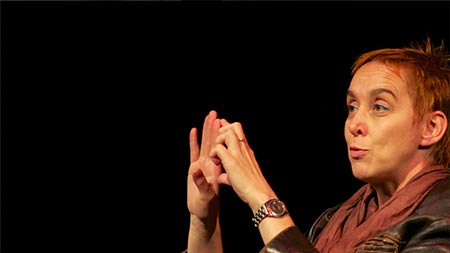 Timandra Harkness is a writer, broadcaster and comedian, specialising in science, maths and statistics. She will be performing her new show, “Take a Risk” on the second day of the Lloyd’s Register Foundation International Conference in October.

We spoke to her about the inspiration for her show and what the audience can expect to see.

What was the inspiration behind your show “Take a Risk”?

I’ve done several shows around maths and science, including Your Days are Numbered: The Maths of Death with Matt Parker. “Take a Risk” was partly about picking up those themes, and partly about me feeling that my professional life was becoming too safe and easy. I wanted to make sure I kept pushing myself, and taking risks. I was worried that my comfort zone was going to shrink and become a straitjacket.

Doing the show is risky for me, as well as the audience, because most of what happens depends on chance, and on what members of the audience choose to do. There are 140 possible permutations for the structure alone. I’ve even randomized audience participation. And there is a 1 in 2,985,984 chance that the audience will have to present the show themselves. I want to demonstrate that there is a real chance the unlikely can happen.

Before I start the show I say to the audience, “There are two possible ‘future yous’. One of those ‘future yous’ will leave here in an hour’s time having amazed themselves with what they’re capable of, having done a show with no preparation. Another ‘future you’ will leave having watched me do the show.”
The second ‘future you’ is a lot more likely, but I think we need to look forward like that and say “I don't know which future me will happen, but maybe the one who’s taken the risk and tested myself is a good future me, and I should give that future me a chance to be born.”

Why do you personally find risk so interesting?

It's an intersection between two things that I'm really interested in - maths and danger.
On the maths side there is probability, and how you calculate the chances of different things happening. But there's also a psychological dimension to deciding what risks you’re prepared to take.
Ultimately, you have to make decisions even though you don't fully know what the outcomes will be. And if you refuse to make decisions and take risks, you never find out what you’re capable of, or reveal who you truly are. We should take calculated risks, but we shouldn’t kid ourselves that we can avoid risk altogether.

Has your perception of risk changed through doing this?

Yes, while writing the show I’ve classified risk into 5 types:

From doing the show, I’ve learned that I'm not very good at financial risk, I'm very resistant to it, even in sensible ways. That’s good, as I would never accidentally lose £10,000 on poker, but also bad because there are sensible things that you should do with financial risk. For example, I haven't got a pension plan and that's crazy. What I should do is put my money into something that will grow and become more valuable by the time I want to retire. That means doing something risky but in a pretty sensible way.

What do you want the audience to take away from the show?

A couple of people have already got in touch to say they’re been thinking about their own attitudes to risk since seeing the show. One person told me, “I’ve decided to take a risk and change my job,” and another person said “I've decided I’m going to come back next year and do a show on the Edinburgh Fringe myself.”

I hope I’ve introduced people to risk, in a good way. It is meant to be funny, but I think people are picking up some of the more serious messages, which is great, because that’s exactly what I wanted.

Timandra will be performing her show at 2pm on Thursday 10th October at the Lloyd’s Register Foundation International Conference held at 8 Northumberland Avenue, London WC2N 5BY. Sign up for the event here for free today to secure your space.